I don’t think these count as weeknotes anymore.

There’s been a lot going on. The biggest change for me is that I’ve taken a full time job that I start March 28th (tomorrow). I wasn’t planning on stopping my solo work, but a few opportunities popped up that I decided to consider. It wasn’t an easy choice to stop working for myself, and it was tough to pick between a few great opportunities, but I’m excited about what’s to come. I’ll write more about it in my next weeknote a few months from now.

I have a lot of special interests. Some of them are like fireworks, creating beautiful flashes of light that quickly fade and fall to the ground. Others smolder for a long time. I chase rabbits, lose sleep, buy things, start projects, and many times move on. I’m at peace with this process.

My latest interest has been vintage typewriters. I was listening to a podcast where the guest gushed about their typewriter and how fun it was to type and send friends letters. In the moment, I realized that a typewriter was something I need more than anything in the world, so I spent way too much time looking at them until I bought one—a 1955 Smith Corona Silent-Super. 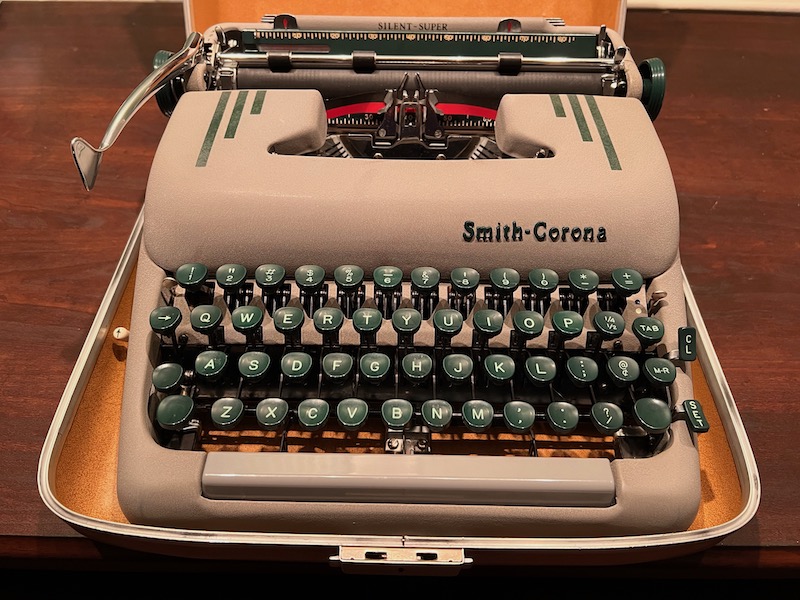 It’s an amazing machine. My wife, the bike mechanic and resident fixer-upper, was able to fix a couple small things on it and get it working like new. We marveled at all its inner-workings.

OK, if you’re still reading and wishing you could receive a typed letter from me, send me your address, and I’ll share a note with you over good ole snail mail.

The flip side of being easily obsessed with any random topic I hear on a podcast is that I find it almost impossible to do something that doesn’t instantly obsess me. My wife knows this and was kind enough to sign me up for a pottery class, because she knew I’d enjoy it and that I’d never sign up myself. I’ve been doing it for a couple of months now and have had a blast.

I started out with a slab pottery class where you hand-mold slabs of clay instead of throwing clay on a wheel. That’s the best I can do to describe it—I’ll let you Google for a better explanation :)

I spend my working days thinking about deeply technical topics. Recently, I was writing test code that would test other test code. So meta. When you work on software like this, your mind goes to an abstract dimension that you can only survive in for a few hours. Otherwise you die and your existence is erased from history.

Leaving this type of work and going to pottery class in the middle of the day has been an interesting break. Yes, you still use your mind, but the thing you’re working with is something you hold in your hands. It’s a wonderful change of pace.

I’m in a throwing class this month where we use a wheel. I’m bad at it, but that’s OK. It’s all for fun.

Golf is expensive and the rounds are long—it probably takes six hours from door to door to play a round of golf. I don’t play a lot of it anymore (because who has that kind of time!), though I do go to the driving range because it’s cheaper and quick.

Lately, I’ve been working on an experiment to switch from swinging right-handed to left-handed. If you’ve played golf, you know how hard it is to play with your normal swing. It’s a whole new level of difficulty to switch to your weak hand.

So why do this? First, someone gave me a set of lefty clubs, and I’m cheap. Second, I’ve tried for the last year to improve my swing and have had marginal success. It’s not easy to fight decades of bad habits. Going lefty is a way to clean the slate and start with better habits. Third, the golf swing is a pull more than a push, so if you’re right-handed, you can be a better golfer by pulling with your dominant right hand. It’s science.

I’m really bad at swinging left-handed. It will be a while before I make the switch permanently.

I’ve used an iPhone X for the last four and a half years, and it was time for an upgrade. The X was in great shape and still a great phone, but the battery wouldn’t make it through a day of normal use. My battery and I were constantly in the red.

The best part of the new phone is that the 13 Pro has an amazing camera. I’ve taken some cool shots with no effort, a few times without looking at the phone. When you look at the Apple page for the 13 Pro, they make it sound like it’s a really nice camera with mobile phone features rather than a phone with a camera. It’s nice having that having that level of camera power in your pocket. Is it necessary, though? Nah.